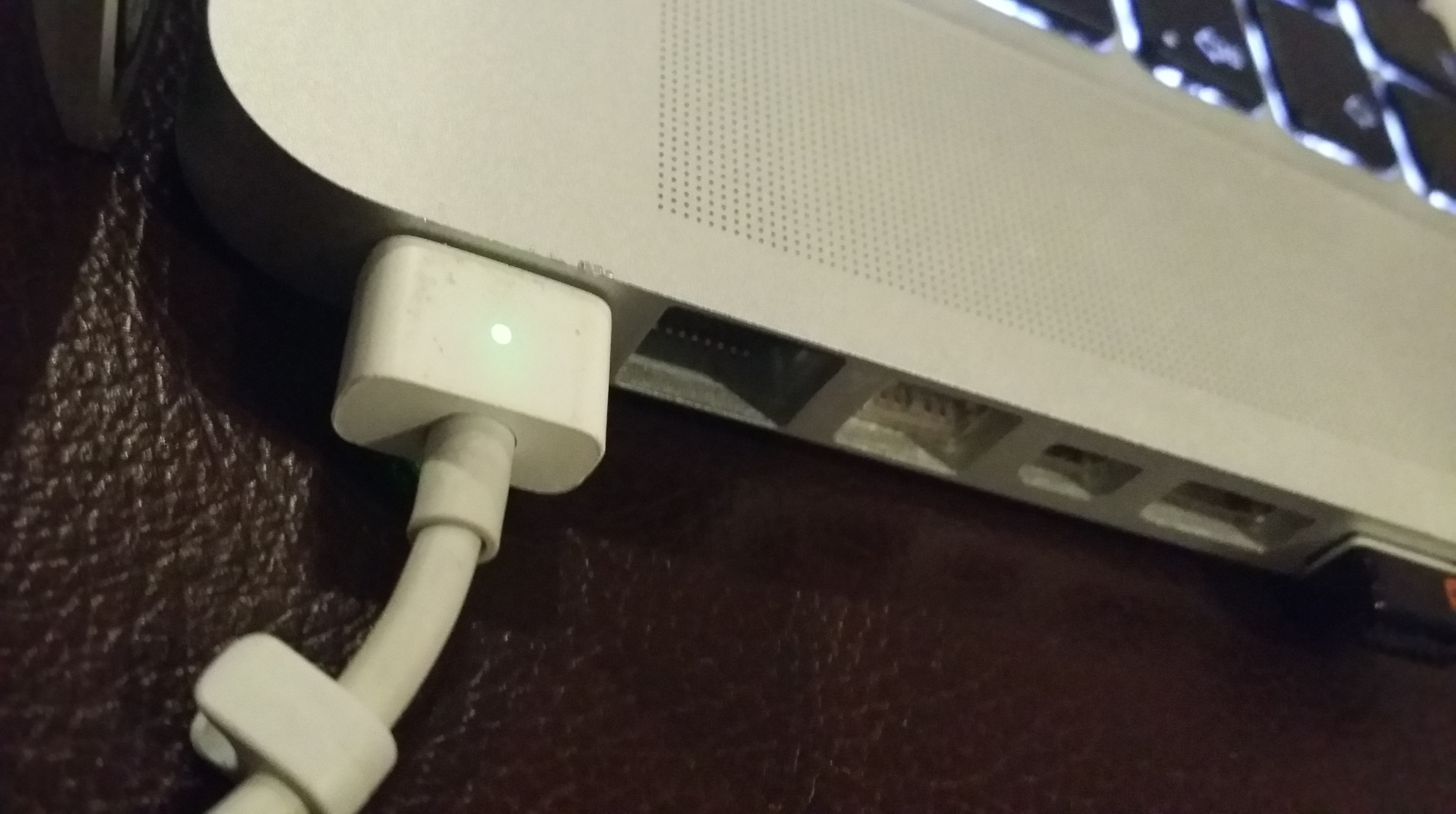 If unsure if it is actually broken

Just in case you are not confident that the cable could actually be broken, check the Troubleshooting section at the end of this post to see if it’s only a “software” problem… you can save yourself some time ;).

Check then the Voltage of the pins when the power supply is connected to the mains.

The difference in voltage should be detected between the external pins and the one immediately next to them (ignore the central pin for this).

If the voltage is not there then the cable is probably broken… read on.

Please keep in mind that playing with electronics and especially power supplies and systems that connects to the main source of your home power network can be dangerous and could lead to serious consequences.

So, don’t attempt any of the following instructions if you are not an expert and you don’t know what you are doing.

This post is only here for illustrative and educational purpose.

Please be aware as well that the power supply should be unplugged at any time during the following operations.

I would suggest to completely detach the cable that runs from the power supply to the socket as well.

The starting point is a broken power supply terminal cable… this part essentially:

Commonly it is broken more toward the other end, the one that enters in the body of the power supply.

To replace it you can buy a replacement part, that looks something like this:

or, given that this want to be an educational experiment, just “fix” the one you already have… more complicated, but more interesting given that the other option will require only a subset of the passage I will cover there.

In my case (to cover an even more complex scenario) I will assume that the broken bit is at the bottom of the cable, so the bit just outside the body of the power supply.

First thing to do is break open the power supply body.

At this point there are two ways of removing the current (broken) cable:

1. Unsolder the two terminals from the circuit board

2. Clip the cable at the base of the cable stopper (the rigid bit that prevents the two wires from being pulled out when the power supply is assembled)

The unsoldering option is definitely doable but it’s quite tricky for several reasons. First of all it is quite difficult to reach the solder point (you will need to disassemble the whole power supply) and after that you could risk to burn some internal circuits if you are not careful.

I decided to go with the second option and clip the two wires at the base:

That’s what left in the power supply side:

Cut the cable on the other side as well… here:

You can then remove a chunk of the cable that is broken and throw it away.

What I did at this point is sacrifice another chunk of cable, cutting it open and removing the inner cable… you can use another cable of course but make sure it’s small enough for the following procedure.

This is the inner cable I am referring to (you will need more than this. peek the pictures below to see what it will used for):

That’s what comes next…

Remove the cable and everything stuck into the hard plastic bit you just isolated, helping yourself with a set of Gimlet (I believe that’s the name. Here is a link to what I mean: https://en.wikipedia.org/wiki/Gimlet_(tool)) and then inserting the new recovered wire in it… it will be tight.

This is a picture with the tool inserted in one of the holes and the other with a piece of new cabe already inserted:

This is how it will look like with the two cables inserted:

Side Note about GND and VCC

As you noticed I’m going to use the same cable for both connection (positive and negative). Because of this the two cables are indistinguishable.

It’s a good idea to take note of what cable will be connected to the “-” and which one will go to the “+” of the power supply.

If you don’t (as I’m not going to do in my case) you’ll need to use a Voltmeter to check it later on.

It’s probably a good idea to put a bit of black tape around both ends of the cable that you’ll connect to the black cable coming from the power supply.

Before soldering I preloaded the cable with some heat shrink cables. One for each cable to isolate them… and one external one to cover both… but… ignore the latest one. I decided to remove it later to leave the cable more flexible. Anyway, that’s a picture of it:

That’s another perspective of the situation at this point:

Solder it! (I could have done a better job… but that’s fine for this :P)

You can now slide the wires in the anti-pull piece, until it is close enough to allow the cables to fit into the power supply box and close it neatly later on:

At this point I put this piece in place, rolled a little bit the cables and added some shrinking cables to keep them in position:

This picture explain where the GND (-) and VCC (+) need to be connected:

In my case (because I didn’t keep track of which cable goes where… and I twisted them as well… oh well…) I used a Voltmeter to gather this information.

Note that this ensured me that the previous soldering was successful.

Be careful if you want to do this as well. You’ll need to connect the power supply to the plug (against any recommendation I gave at the start of this post) and use the Voltmeter to read which cable is the positive one.

Once you know which cable goes where you can insert some shrinking tubes around the cables that you’ll solder and proceed with it.

This time I used a tube for every cable and one to embrace both at the end:

This is the final result (after reassembling the power supply as well):

And the nice working green light :)

If the measurement with the Voltmenter are ok but the green light refuses to go on consider that the mac is a little bit picky and could refuse to charge if it doesn’t recognise the cable… that’s what the central pin of the magsafe connector is for.

One thing you can try (and that worked for me for a cable I bought from ebay) is the following procedure.

Try to reset the System Management Controller (SMC). This is how:

1. Shut down the laptop

3. Press the left-side SHIFT + CONTROL + OPTION and the power button at the same time.

4. Release keys and power button and then turn the laptop on pressing again the power button

If everything goes as planned you should now see the green light magically switching on!

This site uses Akismet to reduce spam. Learn how your comment data is processed.